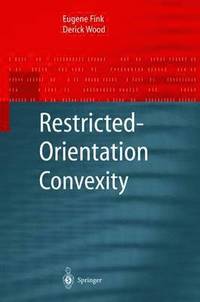 From the reviews: "The well-organized, readable, interesting volume considers two generalizations of the concept of convexity in Rn, and their usual related concepts (hull, visibility, kernel, etc.). ... The volume would be very good for a seminar studying the many results from the last two decades on these forms of generalized convexity. The book closes with suggestions and conjectures for the direction of future research." (John R. Reay, Mathematical Reviews, Issue 2007 j)