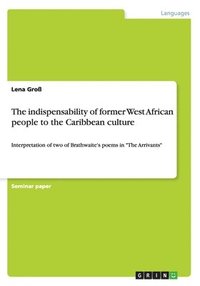 The indispensability of former West African people to the Caribbean culture

Interpretation of two of Brathwaite's poems in "The Arrivants"

av Lena Gross
Häftad Engelska, 2014-07-18
209
Köp
Spara som favorit
Skickas inom 10-15 vardagar.
Gratis frakt inom Sverige över 159 kr för privatpersoner.
Seminar paper from the year 2014 in the subject English - Literature, Works, grade: 1,0, Johannes Gutenberg University Mainz, language: English, abstract: A central theme in Caribbean literature is the absence of regional or national identity (Povey 275). Also Edward Kamau Brathwaite, one of the major voices in the Caribbean literary canon, focuses on transcending and healing the fragmented culture of the dispossessed people, mainly the descendants of West African slaves, living in the Caribbean region. In his poetry, he reexamines the history of the black diaspora in search for cultural wholeness in present-day Caribbean life. Brathwaite's aim thereby is to offer a corrective to these people's problems of dispossession of history and of language.

In his first major work The Arrivants, Brathwaite's overall goal is to enact a trajectory from the slave experience in the Caribbean colonies to Africa and back again to the islands, and thereby explore the African roots as well as the contemporary situation of the African diaspora in the Caribbean. Thus, he is able to illustrate some important African values, considered to be long-lost, in today's Caribbean society and moreover, he is able to portray the affiliation of these black people to the Caribbean culture.

Accordingly, based on Edward Brathwaite's poetry volume The Arrivants, the importance of West African people to the Caribbean culture and especially their imported African elements, such as language, dance, song, and ritual-artistic expressions, will be outlined in this paper to depict their strong influence in the Caribbean and to support their strong survival identities. Therefore, first of all, the social and cultural history as well as the languages of the Caribbean are described to help the reader better understand the contemporary historical background to which Brathwaite's poetry refers. Subsequently, a brief overview of The Arrivants is given, to later on go into more detail by interpreting two of its
Visa hela texten