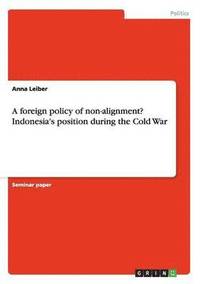 A foreign policy of non-alignment? Indonesia's position during the Cold War

av Anna Leiber
Häftad Engelska, 2014-11-04
239
Köp
Spara som favorit
Seminar paper from the year 2014 in the subject Politics - International Politics - Region: South Asia, grade: 1,0, University of Pavia, course: History of International Relations, language: English, abstract: During the early years of the Cold War the American as well as the Soviet leaders concentrated their political strategy primarily on the European territory. From the early 1950s onwards, however, their attention shifted towards the Asian and African world. Among the Asian countries, especially the new established Republic of Indonesia was soon considered as a significant strategic control point by both superpowers. Thus, in order to gain this young nation as a political ally, the US as well as the Soviet government continuously offered economic and military support during the next 20 years. Despite all these diplomatic efforts, Indonesia didn't join any alliance. Following the 1949 proclaimed foreign policy of non-alignment, president Sukarno wanted to uphold a neutral position between the American and Soviet bloc. Until 1965, however, the Indonesian leader played a successful double game with the Cold War opponents through which he tried to benefit as much as possible.
Looking at the period between the end of the Second World War 1945 and Sukarno's political overthrow in 1965, this paper analyzes two questions. On the one hand, it will focus upon the political attempts coming from the USA and the USSR in order to influence the Indonesian government. On the other hand, by illustrating the latter's behaviour it will underline that Indonesia took a huge advantage from its triangle position between the American and the Soviet bloc and left the path of foreign neutrality soon after its independence.
Visa hela texten