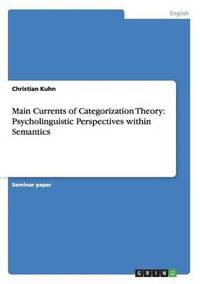 av Christian Kuhn
Häftad Engelska, 2015-04-30
199
Köp
Spara som favorit
Seminar paper from the year 2003 in the subject English Language and Literature Studies - Linguistics, grade: 1- (A-), Otto-von-Guericke-University Magdeburg (Institute for Foreign Language Philology), course: Perspectives in Semantic Theory, 9 entries in the bibliography, language: English, abstract: From the beginning of arts subject in the ancient Greece to modern cognitive science, scholars have been seeking to discover the nature of the relationship between language and thought. This relationship and the basic processes that underlie reason phenomena in general are today called cognitions. Modern cognitive science consists of an interdisciplinary ensemble of various subjects. Findings from the research for artificial intelligence, results of cognitive psychology, neurophysiology, philosophy, and finally linguistics contribute to a better understanding of any type of mental information processing. As language is said to be among the most characteristic human cognitive activities (see LAKOFF, 1987, p 113; see also BIRBAUMER, 1999, p 675), one aim of this work is to show in what respect linguistic findings are crucial to the aims of cognitive science.
For this purpose I will discuss theories around the concept of categorization which is relevant for the traditional linguistic field of semantics, and also applicable to cognitive psychology and furthermore to psycholinguistics. The categorization approach seems to allow explanation for the communicative functions of language and how humans organize knowledge in general. It seems that: "Categorization is everywhere. Life is full of decisions and every choice involves a selection between a variety of competing options. These choices are guided by the category structure (...), both in language as elsewhere in cognition." (CORRIGAN et al., 1989, p 195) The process of categorization means that we unconsciously group together every sensory input to meaningful categories. That is, we economically organize the mental represen
Visa hela texten