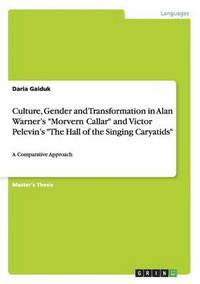 Culture, Gender and Transformation in Alan Warner's 'Morvern Callar' and Victor Pelevin's 'The Hall of the Singing Caryatids'

av Daria Gaiduk
Häftad Engelska, 2015-03-26
649
Köp
Spara som favorit
Skickas inom 10-15 vardagar.
Fri frakt inom Sverige för privatpersoner.
Master's Thesis from the year 2014 in the subject Literature - Comparative Literature, grade: 1.3, University of Flensburg, language: English, abstract: The aim of this thesis is to compare the books of Alan Warner and Victor Pelevin in terms of culture, gender, and transformation. Both 'Morvern Callar' and 'The Hall of the Singing Caryatids' are written in the genre of bildungsroman, which allows us to observe the transformation and growth of protagonists. As both protagonists are young females (one of them working in a brothel, and another one - overcoming suicide of her boyfriend) it is interesting to compare the gender issues they face throughout the narration. The books were published in 1996 (Alan Warner's Morvern Callar) and 2008 ('The Hall of the Singing Caryatids' by Victor Pelevin), at the turn of the twenty-first century and the third millennium. Both writings contain numerous cultural references, music and arts of the time. As well as comparing the cultures represented in the books, I will also investigate the way the Zeitgeist affected the protagonists.
'Dismemberment of Orpheus' by Ihab Hassan serves as the axis of comparison and the main source of inspiration for this work. Music (as a part of culture), the dead male figure (referring to gender issues), and dismemberment (definitely transforming young female protagonist's personality) - are the key elements of this research.
Visa hela texten

Bloggat om Culture, Gender and Transformation in Ala...