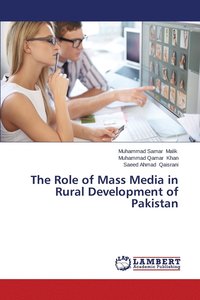 The Role of Mass Media in Rural Development of Pakistan

av Malik Muhammad Samar, Khan Muhammad Qamar, Qaisrani Saeed Ahmad
Häftad Engelska, 2014-02-18
619
Köp
Spara som favorit
Skickas inom 10-15 vardagar.
Fri frakt inom Sverige för privatpersoner.
Mass media, the fourth pillar of democracy plays a pivotal role in up-keeping the socio- political system of a country sound and healthy. Due to the advancement of information and communication technology (ICT), the role of mass media has been multiplied to a higher order. Man has conquered time and space due to this modern technology.Mass media really connects the whole universe with a noble mission to share the sorrows and sufferings, pains and strains, success stories of the society. It always, if properly managed, takes a vital part in political affairs.Mass media perform the role of a dynamic watchdog and erects its fingers towards any backlog in a system. It diagnoses the system and opens the pitfalls and tries to rectify it.In this sense, it is a comprehensive and multidimensional concept and encompasses the development of agriculture and allied activities, village and cottage industries, socio-economic infrastructure, community services and facilities, and above all the human resources in rural areas.
Visa hela texten

Bloggat om The Role of Mass Media in Rural Developme...