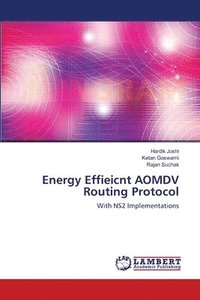 av Hardik Joshi, Ketan Goswami, Rajan Suchak
Häftad Engelska, 2012-06-13
599
Köp
Spara som favorit
Skickas inom 10-15 vardagar.
Fri frakt inom Sverige för privatpersoner.
AdHoc Networking is a concept in wireless communications, which means that users willing to communicate can form a temporary network, without any kind of centralized administration. Each node participating in the network acts both as host and a router and must therefore be willing to forward packets to other nodes. A Wireless routing protocol is required for this purpose. An AdHoc network has certain characteristics that impose new demands on the routing protocol. The nodes are often limited in resources like CPU processing power, memory, battery power and bandwidth. The Internet Engineering Task Force (IETF) has formed a working group named Mobile AdHoc Networks which deals with the routing specifications for adhoc networks. The work produced in this book evaluates some of the widely discussed protocols put forth by the working group, evaluation is carried out in NS2 Simulator. The proposed work focuses on minimizing the Energy Consumption of discover routes. The proposed protocol AOMDV_ENE produces good results in the NS2 simulations. It does perform reasonably well even when the mobility or the number of nodes is increased.
Visa hela texten