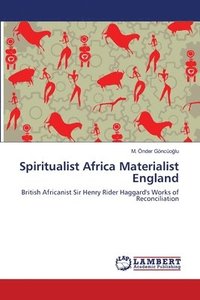 av M Onder Goncuo Lu
Häftad Engelska, 2012-08-22
929
Köp
Spara som favorit
Skickas inom 10-15 vardagar.
Fri frakt inom Sverige för privatpersoner.
In the 19th Century, Britain widened its mechanised industrial power all over the world, and exploited the resources of many communities both in Asia and in Africa. The British Empire became wealthier and at the same time created a sense of national superiority.This sense of Britishness was pitted against the perceived brutishness of others. A combat of the British versus the Brutish ensued. Wherever Britannia colonised and ruled, this British sense of superiority was taught to take it for granted. This was also an age of industrialism and scientific materialism. Science began to surpass religion in this modern world, locating man at the centre of human awareness, consequently confusing belief.Hence, as an idea implying an underlying relationship among body, mind, and nature, spirituality weakened in Britain's process of evolving from non-industrialisation to industrialization.This book therefore explores and interrogates the works of Sir H. R. Haggard in order to clarify the bewildering winds of change emerging in British society in the latter 19th century.Haggard's works represent the quest and need for reconciliation with an uncorrupted other revealed as the non-mechanised self.
Visa hela texten