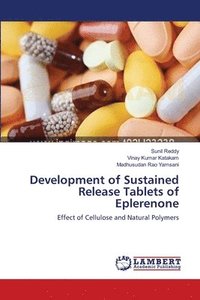 Effect of Cellulose and Natural Polymers

av Sunil Reddy, Vinay Kumar Katakam, Madhusudan Rao Yamsani
Häftad Engelska, 2012-08-23
549
Köp
Spara som favorit
Skickas inom 10-15 vardagar.
Fri frakt inom Sverige för privatpersoner.
The objective of this work was to develop of a suitable SR tablet formulation of Eplerenone and to study the effect of polymers such as HPMC K4M, HPMC K15M, NaCMC, Guar gum, Xanthan gum and Karaya gum on drug release. Profile and to get an optimized formulation. Eplerenone binds to the mineralo corticoidreceptorand blocks the binding of aldosterone, a component of the renin-angiotensin-aldosterone system (RAAS). It has a half life of 4 hrs. When dose is missing it may cause nocturnal attack, so attention was made to develop the Sustained release tablets of Eplerenone. The purpose of controlled release systems is to maintain drug concentration in the blood or in target tissues at a desired value as long as possible. In other words, they are able to exert a control on the drug release rate and duration. In the market only IR tablets of Eplerenone were available which are costly. So there is a need to formulate SRMT of Eplerenone to reduce the cost and increase the patient compliance.
Visa hela texten