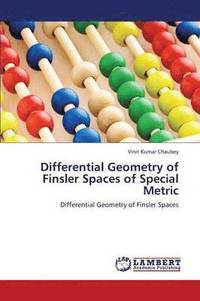 av Chaubey Vinit Kumar
Häftad Engelska, 2013-01-16
579
Köp
Spara som favorit
Skickas inom 10-15 vardagar.
Fri frakt inom Sverige för privatpersoner.
The germs of Finsler geometry were present in the epoch-making lecture of B. Riemann which he delivered in 1854 at Gottingen University. His main comment in his lecture was "Investigation of this more general class would actually require no essential different principles but it would be rather time consuming and throw relatively little new light on the study of space, especially since results cannot be expressed geometrically." Due to Riemann's comments, mathematicians did not try to study of such spaces for more than 60 years. In 1918, 24 years old German, Paul Finsler [3] tried to study such spaces and submitted his thesis to Gottingen University. His approach of study of this geometry was based on calculus of variation. He generalized the idea of calculus of variations with special reference to new geometrical background, which was given by his teacher Caratheodory with parametric form of problems. The creator of this geometry is really L. Berwald in 1925. Finsler geometry is a kind of differential geometry which is usually considered as a generalization of Riemannian geometry. It has wide applications in the Optics, theory of Relativity, Cosmology, electromagnetic theory etc.
Visa hela texten