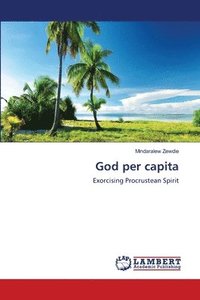 av Mindaralew Zewdie
Häftad Engelska, 2014-02-07
878
Köp
Spara som favorit
God Per Capita is a superb piece of academic clairvoyance in which Prof. Mindaralew Zewdie blended anthropology and philosophy into a new theory which lent its name to the title of this book. Meticulously built on a series of case-studies and brimming with wisdom garnered firsthand, "God Per Capita" offers the academic world and the global readership a whole new way of looking at the real big problems from which humanity bleeds. God Per Capita is a work that sheds light from a new angle on matters which run the spectrum from zero-larceny and zero-rape rate all the way to dictatorship, genocide, crimes against humanity, terrorism, et cetera. Dictatorship and its inordinate derivatives are shown in this work, among other things, as the unfathomably glaring and blaring expressions of the death of the best in oneself and its burial in the tomb of the worst in oneself. It is a situation Prof Mindaralew Zewdie equated with a Procrustean spirit that must, at all costs, be exorcised. To put a bottom line on it,God Per Capita is in a class of those rare books which need only two words to be perfectly described: MUST READ.
Visa hela texten