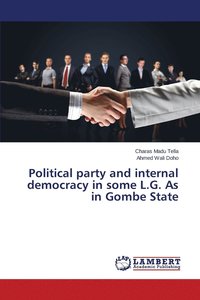 Political Party and Internal Democracy in Some L.G. as in Gombe State

av Tella Charas Madu, Doho Ahmed Wali
Häftad Engelska, 2015-11-13
709
Köp
Spara som favorit
Skickas inom 10-15 vardagar.
Fri frakt inom Sverige för privatpersoner.
The tier of government performs a number of vital functions and responsibilities that have direct bearing on the majority of rural dwellers, a significant number of whom are poor. The attached relevance and the need to address these problems caught the attention of policy makers in Nigeria to focus on a number of political and constitutional reforms with a view to improve their well being.This book therefore attempt to highlights the problems of lack of internal democracy in local governments in not only Gombe state but also Nigeria in general. The data collected and analyzed confirmed the speculations that the political parties at local government levels lacked internal democracy and the process by which political leaders and public office contestants are fielded are manipulated by the party leaders at the top to create the opportunities to actualize their political agenda, and the needed environment to continue the exploitation of the masses.
Visa hela texten