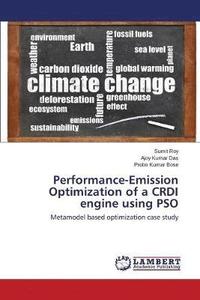 av Roy Sumit, Das Ajoy Kumar, Bose Probir Kumar
Häftad Engelska, 2015-06-15
468
Köp
Spara som favorit
In consideration with the observations on the inherent superior PM-NOx-BSFC trade-off characteristics provided by CRDI with CNG and EGR strategies during experimentation, a potential back drop is thus set to peruse a first of its kind optimization approach to further the trade-off potential of CNG and EGR by their simultaneous application in an existing diesel engine with common rail fuel injection system. FIP, EGR, CES and engine load were chosen as the control variables for the optimization study. An Adaptive Merit Function (AMF) was constituted as the objective function to be optimized and ANN was used correlate the objective function with the chosen control variables while Latin-Hypercube was chosen as the DoE scheduler to provide the initial population sample for the optimization iteration sequence. PSO was chosen as the optimization algorithm due to its inherent simplicity and efficiency in yielding an ensured convergence of the objective function at significantly less computational cost. The inherent design of the AMF objective function ensured that all such optimal trade-off values simultaneously honoured the expectations of the EPA Tier 4 PM and NHC mandates.
Visa hela texten