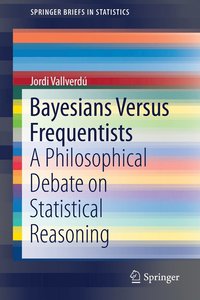 A Philosophical Debate on Statistical Reasoning

av Jordi Vallverdu
Häftad Engelska, 2015-11-08
779
Köp
Spara som favorit
Skickas inom 5-8 vardagar.
Fri frakt inom Sverige för privatpersoner.
This book analyzes the origins of statistical thinking as well as its related philosophical questions, such as causality, determinism or chance. Bayesian and frequentist approaches are subjected to a historical, cognitive and epistemological analysis, making it possible to not only compare the two competing theories, but to also find a potential solution. The work pursues a naturalistic approach, proceeding from the existence of numerosity in natural environments to the existence of contemporary formulas and methodologies to heuristic pragmatism, a concept introduced in the book's final section. This monograph will be of interest to philosophers and historians of science and students in related fields. Despite the mathematical nature of the topic, no statistical background is required, making the book a valuable read for anyone interested in the history of statistics and human cognition.
Visa hela texten

"This book argues for the superiority of bayesianism (the author prefers lower-case) over frequentism, collecting nearly two dozen articles organized into a few sections with an index of persons. ... Anyone interested in the history of statistics, let alone the subject debate, and in how our choice of statistical foundation affects our view of the world will find this work entertaining in enlightening." (Tom Schulte, MAA Reviews, maa.org, August, 2016)

Jordi Vallverdu, Ph.D., M.Sci., B.Mus, B.Phil is a Tenure Professor at Universitat Autonoma de Barcelona, Catalonia, Spain. His research embraces the cognitive and epistemic aspects of contemporary scientific research, especially in the fields of emotional modelling, computer science and robotics. In 2011 he won a Japanese JSPS fellowship to pursue research on computational HRI interfaces at Kyoto University. He was a keynote speaker at ECAP09 (TUM, Munich, Germany), EBICC2012 (UNESP, Brazil) and SLACTIONS 2013 (Portugal). As an expert on emotions and cognition he founded and serves as an Editor-in-chief of the International Journal of Synthetic Emotions (IJSE). He is also a research member of GEHUCT and TECNOCOG.

Some Questions to Begin with.- Ancient Statistics History in a Nutshell.- The Bayesian Approach and its Evolution until the Beginning of 20th Century.- A Conceptual Reply to Reverend Bayes: the Frequentist Approach.- The Co-evolution, Battles and Fights of Both Paradigms.- The Birth of Multicausality as the Death of Causality and Their Statistical Corollaries.- Natural vs. Artificial Minds and the Supercomputing Era.- And the Winner is....- References.