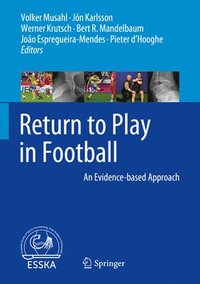 Return to Play in Football

av Volker Musahl, Jon Karlsson, Werner Krutsch, Bert R Mandelbaum, Joao Espregueira-Mendes
Inbunden Engelska, 2018-04-09
2939
Köp
Spara som favorit
Finns även som
Visa alla 2 format & utgåvor
In this book, leading experts employ an evidence-based approach to provide clear practical guidance on the important question of when and how to facilitate return to play after some of the most common injuries encountered in football. Detailed attention is paid to biomechanics, the female athlete, risk factors, injury prevention, current strategies and criteria for safe return to play, and future developments. Specific topics discussed in depth include concussion, anterior cruciate ligament and other knee injuries, back pathology, rotator cuff tears, shoulder instability, hip arthroscopy, and foot and ankle injuries. The chapter authors include renowned clinicians and scientists from across the world who work in the field of orthopaedics and sports medicine. Furthermore, experiences from team physicians involved in the Olympics, National Football League (NFL), Union of European Football Associations (UEFA), and Federation Internationale de Football Association (FIFA) are shared with the reader. All who are involved in the care of injured footballers will find this book, published in cooperation with ESSKA, to be an invaluable, comprehensive, and up-to-date reference that casts light on a range of controversial issues.
Visa hela texten

Volker Musahl, MD, is Associate Professor of Orthopaedic Surgery at the University of Pittsburgh School of Medicine, Associate Professor of Bioengineering at the University of Pittsburgh's Swanson School of Engineering, Program Director of the Sports Medicine fellowship program, and Medical Director of the UPMC Center for Sports Medicine. In addition to his work as a University of Pittsburgh Associate Professor and a leading orthopaedic surgeon, he is co-head team physician for the University of Pittsburgh football team. Dr. Musahl has received various honors and awards and in 2015 was appointed Assistant Editor-in-Chief of Knee Surgery, Sports Traumatology, Arthroscopy (KSSTA). His research interests include knee and shoulder biomechanics. He is a member of ESSKA ISAKOS, AAOS, ORS, AOSSM, AANA, and AGA. Jon Karlsson, MD, PhD, is Professor of Orthopaedics and Sports Traumatology at Sahlgrenska Academy, mainly related to knee and foot and ankle injuries, including tendon injuries. Dr. Karlsson graduated from Medical School in Reykjavik, Iceland. He then moved to Sweden for orthopaedic training, becoming a specialist in Orthopaedics in 1986. He has worked at the Sahlgrenska University Hospital ever since, and is currently Senior Consultant and full-time Professor. He has been Clinical Head of the Orthopaedic Department and is now its Academic Head. He than 300 papers and 30 textbooks in Orthopaedics and Sports Traumatology. He has held important positions in both ESSKA and ISAKOS and is currently Editor-in-Chief of Knee Surgery, Sports Traumatology, Arthroscopy (KSSTA), the official, clinical journal of ESSKA. Joao Espregueira-Mendes, MD, PhD, has been Professor of Orthopaedic Traumatology and Chairman of the Orthopaedic Department at Minho University, Portugal, since 2005. In addition, he is Director of Clinica do Dragao - Espregueira-Mendes Sports Centre - FIFA Medical Centre of Excellence, FC Porto Dragao Stadium, Porto, Portugal. His further posts include Orthopaedic Surgeon of FC Porto and Senior Researcher in Biomaterials, Biodegradables, and Biomimetics in the Department of Polymer Engineering at Minho University. Dr. Espregueira-Mendes was President of the European Society of Knee Surgery, Sports Trauma and Arthroscopy (ESSKA) from 2012 to 2014 and he is Treasurer and Chairman of the Publication Committee of ISAKOS. He is a member of the editorial board of Knee Surgery, Sports Traumatology, Arthroscopy. Werner Krutsch, MD, is deputy director of the FIFA Medical Centre of Excellence Regensburg, Germany. He is sports medicine specialist and knee surgeon in the Department of Trauma Surgery at the University Medical Centre Regensburg. He is Medical director of the Bavarian Football Association and FIFA DC officer. Dr. Krutsch is head of the AO clinical study centre of the University of Regensburg and member of the knee ligament committee of the AGA. Dr. Krutsch has had an active professional football career with clubs including VFB Stuttgart and 1. FC Nurnberg and won several national and international titles in football. He is currently the captain of the German national football team of medical doctors. The focus of the scientific work of Dr. Krutsch is football medicine and injury prevention. Bert R. Mandelbaum, MD, practices with the Santa Monica Orthopaedic & Sports Medicine Group, where he serves as Director of the Sports Medicine Fellowship Program and of the Research and Education Foundation and as Medical Director for the FIFA Medical Center of Excellence in Santa Monica. He was appointed as Chief Medical Officer for the World Special Olympic Games 2015 in LA. Dr. Mandelbaum is a Past President of the International Cartilage Repair Society. He was the Chief Medical Officer for Women's World Cup Soccer in 1999 and 2003 and has been Assistant Medical Director for Major League Soccer since 1996. He served as USA Team Physician for the football World Cups from 1994 to 2010 and was FIFA medical officer for the