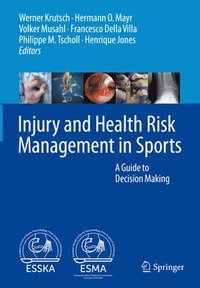 A Guide to Decision Making

av Werner Krutsch, Hermann O Mayr, Volker Musahl, Francesco Della Villa, Philippe M Tscholl
Inbunden Engelska, 2020-04-22
1719
Köp
Spara som favorit
Finns även som
Visa alla 2 format & utgåvor
This book is a comprehensive source of information and guidance on health risk management and medical care across the entire range of sports, in athletes of all ages and ability. General health aspects, injury prevention, first aid and emergency management, diagnosis, treatment, rehabilitation, and return to play are all addressed, with presentation of practical recommendations throughout. All medical disciplines with relevance for athletes - from psychological aspects to dermatological issues - are as well as main pathologies, overuse injuries and indications for surgical treatment of all certain parts of the musculoskeletal system, covered. Key features include a clear structure, short chapters in protocol format, and the inclusion of helpful checklists and tips and tricks for a quick and in-depth overview. Detailed attention is paid both to the medical care, specific to injuries of different parts of the body, and to special considerations relating to individual sports. Among the sport disciplines team sports, athletics, winter sports, track and field, martial arts, motor sports and cycling, extreme sports, swimming and water sports, racket sports, other IOC sports, and Paralympic sports are covered. Due to raising population of certain modern non-IOC sports, e.g. E-Sports, beach sports, flying sports and canyoning, and paltry medical information in this disciplines we put a focus on them. The book is a collaborative work from the newly created ESSKA section European Sports Medicine Associates (ESMA), which brings together the various disciplines of sports medicine. It will be an ideal resource and decision-making tool for doctors, athletes, coaches, and physiotherapists.
Visa hela texten

Werner Krutsch, MD, is deputy director of the FIFA Medical Centre of Excellence Regensburg, Germany. He is sports medicine specialist and knee surgeon in the Department of Trauma Surgery at the University Medical Centre Regensburg. He is Medical director of the Bavarian Football Association and FIFA DC officer. Dr. Krutsch is head of the AO clinical study centre of the University of Regensburg and member of the knee ligament committee of the AGA. Dr. Krutsch has had an active professional football career with clubs including VFB Stuttgart and 1. FC Nurnberg and won several national and international titles in football. He is currently the captain of the German national football team of medical doctors. The focus of the scientific work of Dr. Krutsch is football medicine and injury prevention. Hermann O. Mayr, MD, PhD, is Chief of the Department of Knee, Hip and Shoulder Surgery, Schoen Clinic Munich Harlaching, Germany,. He is also Research Associate in the Department of Orthopedic and Trauma Surgery at the University of Freiburg, Germany,. In 2012 he was appointed Extraordinary Professor at the university. Dr. Mayr is Past Chair of the ESSKA Sports Committee, Past President and Founding President of DKG the German Knee Society. He also served as President of AGA - Society for Arthroscopy and Joint Surgery from 2009 to 2011. Dr. Mayr has been physician to the National German Ski Team since 1990. He has been responsible for various inventions and is the holder of several patents. Volker Musahl, MD, is Associate Professor of Orthopaedic Surgery at the University of Pittsburgh School of Medicine, Associate Professor of Bioengineering at the University of Pittsburgh's Swanson School of Engineering, Program Director of the Sports Medicine fellowship program, and Medical Director of the UPMC Center for Sports Medicine. Dr. Musahl has received various honors and awards and in 2015 was appointed Assistant Editor-in-Chief of Knee Surgery, Sports Traumatology, Arthroscopy (KSSTA). His research interests include knee and shoulder biomechanics. Francesco Della Villa MD, is a Sport and Exercise Medicine physician, in charge of clinical research and development, working in the Education and Research Department of the Isokinetic Medical Group, which is a FIFA Medical Centre of Excellence, located in Bologna, Italy. Dr Della Villa is an active member of different international scientific societies. He has a particular interest in translating research into high level clinical practice, with a focus on rehabilitation and return to play after knee injuries. His research interest include functional outcome after complex sports injury. Philippe M. Tscholl, Orthopaedic Surgeon and Sports Medicine specialist, is Senior Consultant at the Geneva University Hospitals for Knee Surgery and Sports Traumatology, Medical Director of the Swiss Olympic Medical Center and member of the IOC medical center Re-FORM (Reseau Francophone Olympique pour la Recherche en Medecine du sport). He is member of several international societies and expert groups around the knee and sports medicine, member of the editorial board of the KSSTA journal and author of several scientific articles around the knee, especially the patellofemoral joint. He is in charge of the Swiss National Futsal team and the Under 18 Swiss National Ice-Hockey team, team physician of several local American Football, Rugby and Volleyball teams, and has participated at several European Youth Olympic Festivals and Under-18 IIHF World Championships as chief medical officer for Switzerland. He is former research assistant of the F-MARC, having investigated on epidemiology of injuries and their mechanisms, age determination of the wrist on MRI and the use of medication in professional athletes. Henrique Jones, MD, Orthopedic Surgeon and Sports Medicine Specialist, is the Clinical Director of the Orthopedic Surgery and Sports Medicine Clinic