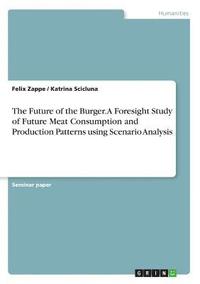 The Future of the Burger. A Foresight Study of Future Meat Consumption and Production Patterns using Scenario Analysis

av Felix Zappe, Katrina Scicluna
Häftad Engelska, 2017-09-06
239
Köp
Spara som favorit
Skickas inom 10-15 vardagar.
Fri frakt inom Sverige för privatpersoner.
Seminar paper from the year 2017 in the subject Sociology - Miscellaneous, grade: 2,0, University of Malta (Edward de Bono Institute), course: Foresight Techniques for Creativity and Innovation, language: English, abstract: This study uses the burger as a metaphor for the investigation of societal consumption patterns and production of meat in the future to finally draw conclusions and recommendations for a more considerate production and consumption.Present meat consumption patterns indicate that meat consumption is on the rise (Benton, 2016). The implications this carries with it are mainly a huge stressor on the environment as its production is the problem rather than its consumption (ibid.). The cultivation of cattle in particular, account to around one third of greenhouse gas responsible for climate change worldwide (Food-studies.com, 2017). As meat production is rising, this indicates meat consumption is raising as well (Benton, 2016). However there are two main problems in meat production, the environmental impact (Food-studies.com, 2017) and the natural scarcity of enough meat for the whole world population (ibid.).In contrast to the raising production, meat consumption especially in the western world is becoming more considerate. It is becoming more and more a feast and a source of enjoyment, also something that is deliberately done with friends or has undergone an eventation. However there is another trend that more and more people' s nutritional fall back option is a quick mostly meaty snack, e.g. sausages or fish for just small amounts of money. This dilemma of production problems and changing consumption is by the mind of the authors best expressed in the metaphor of a burger, which summarizes the production, i.e. cattle and beef farming, and the underlying consumption patterns, e.g. during a night out, barbequing with friends or as a quick and unhealthy snack, best in its appearance.
Visa hela texten

Bloggat om The Future of the Burger. A Foresight Stu...