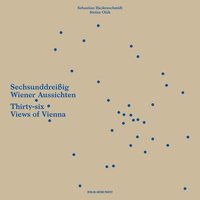 av Stefan Olah, Sebastian Hackenschmidt
Häftad Engelska, 2017-11-01
279
Köp
Spara som favorit
"Thirty-six views of Vienna" is based on the idea of shot and counter-shot, giving a total of seventy-two photographs. Similarly to the technique developed first of all in film editing (used mainly in dialogue scenes), shots of the selected building are shown - then in counter-shots, the views available from the building. This simple concept results in not only thirtysix fascinating reciprocal views of architectural aspects and city prospects, but also a wide-ranging overview, extending beyond the customary image of the city.
Visa hela texten

Stefan Olah, born in 1971, attended Verena von Gagern's photography class at the 1989 Salzburg International Summer Academy of Fine Arts. He worked as an assistant in the photo studios of Leo Kandl and Peter Strobl, studied at the State Academy of Photographic Design in Munich, and has since lectured in Photography at the Vienna University of Applied Arts, where he has been a Senior Artist since 2010. He has worked on extensive commissions for Audi, Austrian Airlines, Bank Austria, Red Bull, and Swarovski, and he has had photographs displayed in several exhibitions and publications.