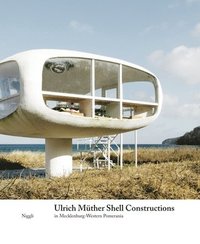 av Rahel Lammler, Michael Wagner, Ulrich Muther
Häftad Engelska, 2010-01-01
259
Köp
Spara som favorit
Skickas inom 7-10 vardagar.
Fri frakt inom Sverige för privatpersoner.
The East German engineer Ulrich Muther contributed an important chapter to the European history of shell construction. From 1963 on he realized pioneering shell constructions that rank among the classics of modernism and inspired architects from all over the world. The book can be understood as a classical architecture guide and furnishes a well-founded insight into the euphoric belief in progress that attended the building boom of the 1960s and 1970s. The buildings are portrayed with the aid of current photographs, plans, texts and project information.
Visa hela texten

Ulrich Muther was born on July 21st, 1934 in Binz on the island of Rugen. At 17 Muther began his training as an engineer at the engineering school in Neustrelitz where he acquired his first knowledge of statics and engineering. During his studies in Dresden Muther directed his attention to shell constructions made of concrete. In 1963 he realised the idea in his final paper in the form of a roof for the multi-purpose hall of the vacation home, Haus der Stahlwerker (House of the Steelworkers) in Binz. It is considered the first hypar shell structure made of reinforced concrete in the GDR. With the construction of the hall for the Baltic Sea Fair in Rostock Schutow in 1966, Muther layed the foundation stone for his continued success and began to attract the attention of professional circles within the GDR. In the sixties and seventies Muther's shell constructions provided the ideal architectural touch for the new socialist Germany as a foil to West Germany. The minimal deployment of materials that were scarce to begin with fit in perfectly in the context of the generally promoted rationalisation in construction.