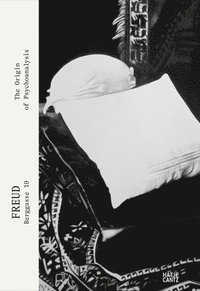 av Monika Pessler, Daniela Finzl
Inbunden Engelska, 2020-07-09
509
Köp
Spara som favorit
Kan tyvärr inte levereras innan julafton.
Sigmund Freud himself was certainly aware of the significance of psychoanalysis when he founded it: he saw it on the same level as the Copernican revolution and Darwin's theory of evolution. The theory of the subconscious, which today has the status of an anthropological paradigm, originated at Berggasse 19 in Vienna. Today, in the building where Freud lived and had his practice, there is a museum dedicated to him. This catalogue, devoted to the fascinating, pioneering history of psychoanalysis and its impact, is appearing in conjunction with the museum's renovation. The book sheds light on Freud's life and work and is amply supplemented with a presentation of the museum's art collection. The insightful essays on psychoanalysis, along with the Freud Museum's art collection (initiated by Joseph Kosuth) activate Freud's legacy, allowing the imaginary and the imagination to meet in unique ways. An introduction by the multi-award-winning author Siri Hustvedt begins the book.
Visa hela texten

At the turn of the previous century, SIGMUND FREUD (1856-1939) began a cultural revolution by advocating for the recognition of, and research into, the human subconscious. As the inventor of psychoanalysis and an innovative scientist and intellectual of Viennese Modernism, his work is of almost immeasurable significance and continues to influence the most diverse disciplines, including the arts. SIRI HUSTVEDT has published numerous scientific articles on psychiatry, neurology, the neurosciences, and philosophy. She is also the author of a volume of poetry, seven novels, and four collections of essays. Hustvedt is the recipient of many awards, including the International Gabarron Prize for Thought and Humanities, the Los Angeles Times Book Prize for literature, and the American Academy of Arts and Letters Award for Literature. JOSEPH KOSUTH (*1945) ) is one of the most renowned Conceptual artists in the United States. His slyly dialectical oeuvre is represented in exhibitions and collections around the world. Thanks to his initiative, works by artists such as John Baldessari, Wolfgang Berkowski, Pier Paolo Calzolari, Jessica Diamond, Georg Herold, Susan Hiller, Ilya Kabakov, Sherrie Levine, Haim Steinbach, Franz West, and Heimo Zobernig have found their way to the Sigmund Freud Museum in Vienna.