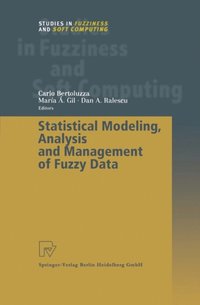 av Carlo Bertoluzza, Maria A Gil, Dan A Ralescu
E-bok (PDF - DRM), Engelska, 2012-11-02
1509
Ladda ned
Spara som favorit
Laddas ned direkt
Läs i vår app för iPhone, iPad och Android
Finns även som
Visa alla 2 format & utgåvor
&quoteStatistical Modeling, Analysis and Management of Fuzzy Data,&quote or SMFD for short, is an important contribution to a better understanding of a basic issue -an issue which has been controversial, and still is though to a lesser degree. In substance, the issue is: are fuzziness and randomness distinct or coextensive facets of uncertainty? Are the theories of fuzziness and random- ness competitive or complementary? In SMFD, these and related issues are addressed with rigor, authority and insight by prominent contributors drawn, in the main, from probability theory, fuzzy set theory and data analysis com- munities. First, a historical perspective. The almost simultaneous births -close to half a century ago-of statistically-based information theory and cybernetics were two major events which marked the beginning of the steep ascent of probability theory and statistics in visibility, influence and importance. I was a student when information theory and cybernetics were born, and what is etched in my memory are the fascinating lectures by Shannon and Wiener in which they sketched their visions of the coming era of machine intelligence and automation of reasoning and decision processes. What I heard in those lectures inspired one of my first papers (1950) &quoteAn Extension of Wiener's Theory of Prediction,&quote and led to my life-long interest in probability theory and its applications to information processing, decision analysis and control.
Visa hela texten