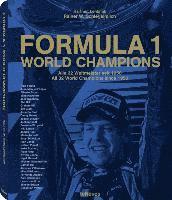 av Rainer W Schlegelmilch, Rainer Schlegelmilch, Teneues
(1 röst)
Inbunden Engelska, 2012-04-01
479
Köp
Spara som favorit
Skickas inom 3-6 vardagar.
Fri frakt inom Sverige för privatpersoner.
Bernie Ecclestone described Formula One as "the most thrilling show on earth," and he couldn't be more right. The excitement, the drama, the suspense of race day--indescribable. And the spectrum of dare-devil heroes emerging out from the heat of the track ranges from the charismatic maturity of Juan Manuel Fangio to the impetuous youthfulness of Sebastian Vettel. In this luxury art book, illustrious F1 photographer, Rainer Schlegelmilch presents stunning documentation of every man to have ever been crowned world champion. Drawing on a portfolio that spans 5 decades worth of experience in the field, Rainer Schlegelmilch's photographic documentation will help you recall the glorious triumphs of serial winner Michael Schumacher, as well as the tragic accidents of drivers like Jim Clark and Ayrton Senna with his exquisite camera work. This book will draw you in to the epicenter of all the action from the last sixty-two years--whether cockpit or pit lane.
Visa hela texten

"An opulent art book with terrific photography in a manner of speaking: an encyclopedia that reaches maximum speeds." Der Spiegel"

One of the most sought after photographers in Formula 1, Rainer Schelgelmilch began his career in 1964 when he opened his own studio in Franfurt. Working primarily in advertising photography at the time, Schelgelmilch began documenting the races he attended as a hobby. Today, he systematically attends every event on the racing circuit and, having pioneered many techniques of sports photography himself, is an unquestionable authority in the field.