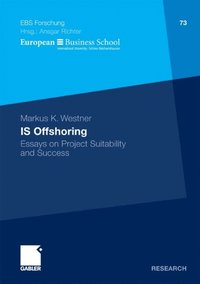 Essays on Project Suitability and Success

av Prof Dr Susanne Strahringer, Markus Westner
E-bok (PDF - DRM), Engelska, 2009-11-19
969
Ladda ned
Spara som favorit
Laddas ned direkt
Läs i vår app för iPhone, iPad och Android
The industrialization of service industries is a phenomenon which industries such as banking and finance adopted several years ago. Although IT can be considered an enabler in these efforts, the IT industry itself has not yet taken much advantage of industrialization. As this is slowly changing, ideas like global sourcing and global value chains have entered the mindset of top and middle IT management. Although sourcing IT services from near or far away countries in order to profit from labor cost differentials is a topic frequently generating a lot of controversy, it can no longer be ignored as one of several options for staying globally competitive. Even though some businesses promise to refrain from offshoring in order to strengthen local economies, they might not be willing to accept the costs of IT services fully provided domestically. Thus, even businesses which are reluctant when it comes to directly offshoring their own IT services might be indirectly profiting from it as they expect their service providers to stay globally competitive - be it by offshoring or by any other means. With this controversy in mind, it is exceptionally important that offshoring endeavors turn out to be as successful as possible or at least as successful as expected. However, businesses indulging in offshoring do not necessarily report convincing outcomes. Particularly in the case of offshoring from non-English speaking countries, language barriers seem to be significantly impeding offshoring success.
Visa hela texten