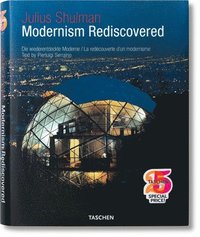 This is TASCHEN's 25th anniversary - special edition! It is a new abridged version. The buildings burned in our memories, which to us represent the spirit of fifties and sixties architectural design, were those whose pictures were widely published in magazines and books; but what about those that got lost in the process, hardly or never appearing in publication? The exchange of visual information is crucial to the development, evolution, and promotion of architectural movements. If a building is not widely seen, its photograph rarely or never published, it simply does not enter into architectural discourse. Many buildings photographed by Julius Shulman suffered this fate, their images falling into oblivion. With this book, TASCHEN brings them to light, paying homage to California Modernism in all its forms. The abandoned files of Julius Shulman show us another side of Modernism that has stayed quiet for so many years. Bringing together nearly 250 forgotten masterpieces, "Modernism Rediscovered" pays tribute to these lesser known yet outstanding contributions to the modern architectural movement. It's like sneaking into a private history, into homes that have rarely been seen and hardly appreciated as of yet.
Visa hela texten

A resident of Los Angeles since 1920, Julius Shulman has been documenting modernist architecture in Southern California and across the globe for nearly eight decades. His images of Pierre Koenig's Case Study House No. 22 (1960) in Los Angeles and Richard J. Neutra's Kaufmann House (1947) in Palm Springs are among the most recognizable and iconic architectural photographs of the 20th century. Shulman's interest in photography developed into a career when he photographed Neutra's Kun Residence in Los Angeles with his Kodak Vestpocket camera in 1936. Neutra admired young Shulman's images and continued to commission his work. Other leading architects of the time followed suit, as did hundreds of magazines, newspapers, and book publishers. Shulman's numerous awards include the Architectural Photography Medal from the American Institute of Architects (1969), a lifetime achievement award from the International Center of Photography in New York (1998), and honorary doctorates from various academic institutions.