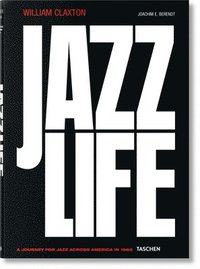 av Joachim E Berendt
Inbunden Engelska, 2021-05-07
663
Köp
Spara som favorit
In 1960, photographer William Claxton and noted musicologist Joachim Berendt traveled the United States hot on the trail of jazz. Through music halls and marching bands, side streets and subways, they sought to document this living, breathing, beating musical phenomenon that enraptured America across social, economic, and racial lines. The result of Claxton and Berendt's collaboration was Jazzlife, much sought after by collectors and now revived in this fresh TASCHEN volume. From coast to coast, from unknown street performers to legends of the genre, this defining jazz journey explores just what made up this most original of American art forms. In New Orleans and New York, in St. Louis, Biloxi, Jackson, and beyond, Claxton's rapturous yet tender images and accompanying texts examine jazz's regional diversity as much as its pervasive vitality and soul. They show the music makers and the many spaces and people this music touched, from funeral parades to concert stages, from an elderly trumpet player to kids who hung from windows to catch a glimpse of a passing band. With images of Charlie Parker, Count Basie, Duke Ellington, Muddy Waters, Gabor Szabo, Dave Brubeck, Stan Getz, Billie Holiday, Ella Fitzgerald, Miles Davis, Charles Mingus, Thelonious Monk, John Coltrane, and many more, this is as much a compelling slice of history as it is a loving personal tribute.
Visa hela texten

"Even in its new incarnation, Jazzlife remains a book unique in the jazz literature, and not only for its physical dimensions. Pore over its pages, and you're seeing jazz - and related music - practically everyone who mattered turns up in these pages." * The Chicago Tribune *

Joachim E. Berendt (1922-2000) was a journalist, author, founding member of South West German Radio (Sudwestfunk), and a producer of more than 250 music records. His 1953 book Das Jazzbuch became the most successful history book on jazz worldwide. His vast collection of records, books, and jazz documents form the basis of the Jazzinstitut Darmstadt. William Claxton (1927-2008) began his career shooting jazz record cover art and made his name with images of such leading musicians as Chet Baker, Charlie Parker, Duke Ellington, Dizzy Gillespie, and Billie Holiday. His work was featured in Life, Paris Match, and Vogue and in galleries around the world.