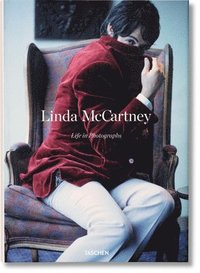 av Annie Leibovitz, Martin Harrison, Alison Castle
Inbunden Engelska, 2015-03-10
299
Köp
Spara som favorit
Skickas inom 3-6 vardagar.
Fri frakt inom Sverige för privatpersoner.
In 1966, during a brief stint as a receptionist for Town and Country magazine, Linda Eastman snagged a press pass to a very exclusive promotional event for the Rolling Stones aboard a yacht on the Hudson River. With her fresh, candid photographs of the band, far superior to the formal shots made by the band's official photographer, Linda secured her name as a rock 'n' roll photographer. Two years later, in May 1968, she entered the record books as the first female photographer to have her work featured on the cover of Rolling Stone with her portrait of Eric Clapton. She went on to capture many of rock's most important musicians on film, including Aretha Franklin, Jimi Hendrix, Bob Dylan, Janis Joplin, Simon & Garfunkel, The Who, The Doors, and the Grateful Dead. In 1967, Linda went to London to document the "Swinging Sixties," where she met Paul McCartney at the Bag O'Nails club and subsequently photographed The Beatles during a launch event for the Sgt. Pepper's Lonely Hearts Club Band album. Paul and Linda fell in love, and were married on March 12, 1969. For the next three decades, until her untimely death, she devoted herself to her family, vegetarianism, animal rights, and photography. From her early rock 'n' roll portraits, through the final years of The Beatles, to raising four children with Paul, Linda captured her whole world on film. Her shots range from spontaneous family pictures to studio sessions with Stevie Wonder and Michael Jackson, as well as encounters with artists Willem de Kooning and Gilbert and George. Always unassuming and fresh, her work displays a warmth and feeling for the precise moment that captures the essence of any subject. Whether photographing her children, celebrities, animals, or a fleeting moment of everyday life, she did so without pretension or artifice.This retrospective volume is a lasting and deeply personal testament to Linda's talent, produced in close collaboration with the McCartney family, with forewords by Paul, Stella, and Mary McCartney.
Visa hela texten

"Sir Paul McCartney has created the ultimate tribute to his late wife Linda, with a book to celebrate her talent."

Annie Leibovitz's body of work encompasses some of the most well-known portraits of our time. Leibovitz began her career as a photojournalist for Rolling Stone in 1970 while she was still a student at the San Francisco Art Institute. In 1983, when she joined the staff of the revived Vanity Fair, she was established as the foremost rock music photographer and an astute documentarian of the social landscape. At Vanity Fair, and later at Vogue, her work with actors, directors, writers, musicians, athletes, and political and business figures, as well as her fashion photographs, expanded her collective portrait of contemporary life. Leibovitz has published several books and has exhibited widely. She is a Commandeur in the French government's Ordre des Arts et des Lettres and has been designated a Living Legend by the Library of Congress. Martin Harrison is a historian of art and photography and an exhibition curator who has collaborated with the likes of Linda McCartney and Peter Lindbergh on numerous projects and exhibitions. He has been working on Francis Bacon for twenty years, and most recently edited the artist's catalogue raisonne (2016). Alison Castle received a BA in philosophy from Columbia University and an MA in photography and film from NYU/International Center of Photography. She is editor of photography, film, and design titles, including Some Like It Hot, The Stanley Kubrick Archives, Linda McCartney. Life in Photographs, and Marc Newson. Works. Linda McCartney (nee Eastman) was born in New York in 1941. She took a photo course with Hazel Archer and studied art history at the University of Arizona before settling in New York City, where she began her photo career shooting rock portraits. Outside of her photography, which has been exhibited in over 50 galleries worldwide including the Victoria and Albert Museum, London, the National Portrait Gallery, London, and the International Center of Photography, New York, Linda McCartney is known for her passionate animal rights activism and her staunch vegetarianism. She wrote cookbooks and founded her own brand of frozen vegetarian meals, all the while raising a family, continuing to take photographs, and participating as a Wings band member alongside Paul McCartney. She died in 1998 at the age of 56.