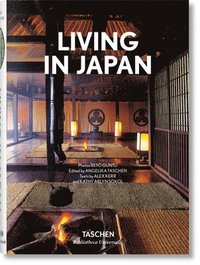 Inbunden Engelska, 2018-01-25
179
Bevaka
Spara som favorit
Bokens leverantör håller tillfälligt stängt på grund av Coronapandemin. Klicka "Bevaka" för att få ett mejl när boken går att beställa igen.
So rich and unique is traditional Japanese architecture that it's nearly impossible to improve upon. Yet contemporary Japanese designers and architects keep finding fresh approaches to refurbish and take inspiration from the ways of old. Whether it's a pristinely preserved traditional house or a sleek modern apartment, the best Japanese homes share a love of cleverly designed spaces and warm materials like wood, brick, and bamboo. From a thatched roof farmhouse occupied by a Zen priest to Tadao Ando's experimental 4x4 House, from Shigeru Ban's conceptual Shutter House to a beautiful domestic homage to bamboo, this elegant compendium traverses the multifaceted landscape of Japanese living today. Enriched by 170 brand new, unpublished photographs, this re-edition takes you on breathtaking journey through the Land of the Rising Sun-complete with a list of addresses, should you wish to undertake this journey to Japan's most fascinating inns and homes yourself. An insightful glossary of key terms, such as tatami, shoji, and noren, will also help you come to grips with all elements of Japan's unique aesthetic of Eastern minimalism.
Visa hela texten

"The photographs alone are enough to keep readers entranced for hours, but tear your eyes away and the text is equally enthralling."

Author, art collector, calligrapher, and restorer of old houses, Alex Kerr has lived in Japan and Thailand since 1964. As a writer, he is known for Lost Japan (1996), Dogs and Demons (2001), and Another Kyoto (2016). Kathy Arlyn Sokol is a writer, interviewer, and award-winning narrator. Her published works include Rasta Time, based on her exclusive interview with Bob Marley, and Another Kyoto, co-written with Alex Kerr, on the secrets of the ancient city. She presently resides in Udaipur in Rajasthan, India. Angelika Taschen studied art history and German literature in Heidelberg, gaining her doctorate in 1986. Working for TASCHEN from 1987, she has published numerous titles on art, architecture, photography, design, travel, and lifestyle. Swiss photographer Reto Guntli, based in Zurich, regularly travels the world shooting for international magazines. He has published numerous books and contributed to such TASCHEN publications as Inside Asia, Living in Japan, Living in Bali, Great Escapes Asia and Great Escapes Europe.