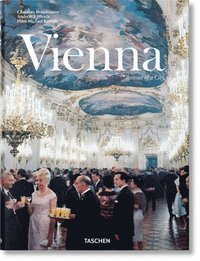 Vienna. Portrait of a City

av Christian Brandstatter, Andreas J Hirsch, Hans-Michael Koetzle
Book Engelska, 2019-11-12
439
Köp
Spara som favorit
Skickas inom 5-8 vardagar.
Fri frakt inom Sverige för privatpersoner.
Vienna combines drama and elegance like no other. For centuries the heart of the Austro-Hungarian Empire, the stately city on the Danube, has been defined by vast palaces and imperial grandeur-but behind the Baroque opulence, Vienna is also a place of genteel coffee house culture, epicurean tradition, and a heritage of both delicate and daring music, art, and design, from Johann Strauss to Egon Schiele, from Gustav Mahler to Josef Hoffmann. This volume is a treasure trove of photography from the last 175 years, following the evolution of Vienna from imperial capital to modern metropolis. Like a visual walk through time and cityscape, hundreds of carefully curated pictures trace the developments in Vienna's built environment and the cultural and historical trends they reflect, whether the urban Gesamtkunstwerk of the 19th-century Ringstrasse or the experiments of "Red Vienna" in the 1920s, when the city had a social democrat government for the first time. Through these remarkable photographs, we discover not only the great landmarks and lesser-known corners of Vienna, but also the ubiquity and the tumult of its history. We see the cultural blossoming of the fin de siecle, when radical innovators such as Gustav Klimt, Egon Schiele, Adolf Loos, and Sigmund Freud turned Vienna into a "laboratory of modernity"; the clashes of 1934; the ascent of Nazi dictatorship; and the horrors writ by the Holocaust in what was once one of the most populous and multi-ethnic cities on earth. More recently, fascinating postwar photographs explore the Vienna of the Third Man, at once a city in ruins and a hub for spies. The book closes with the most recent pictures, celebrating the emergence of today's Vienna-one of the most attractive cities in Europe, in which rich history once again coexists with international flair and vibrant contemporary culture.
Visa hela texten

"This colourful book celebrates the emergence of today's metropolis - one of the most attractive cities in Europe, in which rich history once again coexists with international flair and vibrant contemporary culture." * independent.co.uk *

Christian Brandstatter, born 1943, founded Brandstatter Verlag in 1982. He is the author and designer of numerous illustrated books, including groundbreaking publications on Vienna around 1900, including Gustav Klimt und die Frauen (1994), Design der Wiener Werkstatte (2003), and Wien 1900: Kunst Design Architektur Mode (2018), as well as on Austrian photographic history. Andreas J. Hirsch, born 1961 in Vienna, is an author, curator and artistic photographer. His writings include books on Pablo Picasso, Tina Modotti, Friedensreich Hundertwasser and H.R. Giger. From 2009 to 2014, he was curator at the KunstHausWien and organized exhibitions on Henri Cartier-Bresson, Linda McCartney and H.R. Giger, among others. Hans-Michael Koetzle, born 1953, is a Munich-based freelance author and journalist, focusing mainly on history and the aesthetics of photography. He has published numerous books on photography, including Die Zeitschrift twen (1995), Photo Icons (2001), Das Lexikon der Fotografen (2002), Rene Burri (2004), Photographers A-Z (2011) and Dr. Paul Wolff & Tritschler (2019).