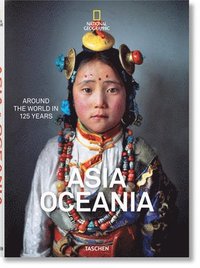 National Geographic. Around the World in 125 Years. Asia&;Oceania

av Reuel Golden
Inbunden Engelska, 2017-10-11
439
Bevaka
Spara som favorit
Tillfälligt slut – klicka "Bevaka" för att få ett mejl så fort boken går att köpa igen.
For over five generations, National Geographic magazine has dazzled and educated people with its incredible photographs and gripping stories of all corners and oceans of the Earth. Inspired from our monumental Around the World in 125 Years, this volume curates over 250 captivating images, sourced directly from the National Geographic archives. Traversing travel, wildlife, science, history, culture, and conservation, this compendium is in equal parts a breathtaking homage to the kaleidoscopic wonders of Asia and Oceania, and a unique tribute to the world's most famous photography magazine. Split into geographical sections-Middle East, South, Southeast, North and East Asia, as well as Australia, New Zealand, New Guinea, and the Pacific and South Pacific Islands- our trans-continental journey through time and space spans evocative black-and-white pictures to autochromes, from the golden age of Kodachromes to digital. Along the way, we tread the mile-long rock cleft leading up to the singular approach to the lost city of Petra; take in the majesty of the Taj Mahal; get uncomfortably close and personal with Kamchatka brown bears; discover Japan's 'naked festival' where men heedlessly plunge into darkness wearing next to nothing; and come nose to nose with gray reef sharks in the waters of the Marshall Islands. Photographers featured include Steve McCurry, David Doubilet, Jodi Cobb, and Frans Lanting. Readers will discover how National Geographic evolved from presenting a romantic view of the continent for its armchair travelers, long before the Travel Channel and Google Images, to edgier stories reflecting overcrowded cities, rural hardship, and environmental threats. Complete with prime examples of the magazine's revered and groundbreaking underwater and wildlife photography, this book is both a window to the world and a cultural investment to be cherished and shared.
Visa hela texten

"The kind of carefully compiled collection that will remain relevant for many years to come." * Bespoke, Beirut *

Reuel Golden is the former editor of the British Journal of Photography and the Photography editor at TASCHEN. His TASCHEN titles include: Mick Rock: The Rise of David Bowie, both London and New York Portrait of a City books, Andy Warhol. Polaroids, The Rolling Stones, Her Majesty, Football in the 1970s, the National Geographic editions, and The David Bailey SUMO.