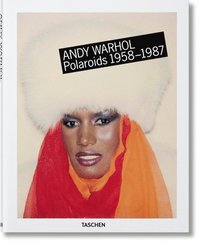 av Richard B Woodward, Reuel Golden
Inbunden Engelska, 2017-08-15
349
Köp
Spara som favorit
Skickas inom 5-8 vardagar.
Fri frakt inom Sverige för privatpersoner.
Andy Warhol was a relentless chronicler of life and its encounters. Carrying a Polaroid camera from the late 1950s until his death in 1987, he amassed a huge collection of instant pictures of friends, lovers, patrons, the famous, the obscure, the scenic, the fashionable, and himself. Created in collaboration with the Andy Warhol Foundation, this book features hundreds of these instant photos. Portraits of celebrities such as Mick Jagger, Alfred Hitchcock, Jack Nicholson, Yves Saint Laurent, Pele, Debbie Harry are included alongside images of Warhol's entourage and high life, landscapes, and still lifes from Cabbage Patch dolls to the iconic soup cans. Often raw and impromptu, the Polaroids document Warhol's era like Instagram captures our own, offering a unique record of the life, world, and vision behind the Pop Art maestro and modernist giant. (c) The Andy Warhol Foundation for the Visual Arts, Inc.
Visa hela texten

"The glam Grace Jones cover is a purchase incentive on its own." * Evening Standard, London * "Free from likes, filters and double taps, a look into Warhol's Polaroid series takes us beyond the screens of Instagram and into his very own visual diary." * CNN Style, London *

Richard B. Woodward is a New York based arts critic who contributes regularly to the Wall Street Journal and New York Times. His journalism has appeared in numerous publications, from The Atlantic, Bookforum, Film Comment, The American Scholar, and The New Yorker to Vanity Fair, Interview, and Vogue. His essays on art and photography have been featured in more than 20 monographs and museum catalogs. Reuel Golden is the former editor of the British Journal of Photography and the Photography editor at TASCHEN. His TASCHEN titles include: Mick Rock: The Rise of David Bowie, both London and New York Portrait of a City books, Andy Warhol. Polaroids, The Rolling Stones, Her Majesty, Football in the 1970s, the National Geographic editions, and The David Bailey SUMO.