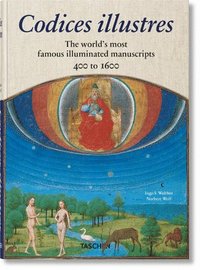 The World's Most Famous Illuminated Manuscripts 400 to 1600

av Norbert Wolf, Ingo F Walther
(1 röst)  |  Läs 1 recension
Inbunden Engelska, 2018-04-10
289
Köp
Spara som favorit
Skickas inom 5-8 vardagar.
Fri frakt inom Sverige för privatpersoner.
From The Book of Kells to Boccaccio's Decameron, from the Vienna Genesis to Dante's Divine Comedy: to open Codices illustres is to open the door into a precious, private world. Now in a revised format, this radiant book brings you face-to-face with 167 of the most exquisite and important manuscripts of the medieval age. Presented in brilliant large-format reproductions, these paradigms of miniature painting and illumination from the 4th century to 1600 were once the property of some of the greatest power players in history. Now art-historical treasures, they are worth many millions and typically tucked away in private collections or closely guarded archives-until now. Although the focus of this collection is on European manuscripts, examples from Mexican, Persian, and Indian tradition illustrate the refinement and intricacy of manuscript illumination in non-European cultures. An informative synopsis for each manuscript orients the reader at a glance, while a 36-page appendix contains biographies of the artists, as well as an extensive bibliography, an index, and a glossary for technical terms.
Visa hela texten

"The one book you want if you are interested in illuminated manuscripts-and once you open it, you will be."

Norbert Wolf graduated in art history, linguistics, and medieval studies at the Universities of Regensburg and Munich, and earned his PhD in 1983. He held visiting professorships in Marburg, Frankfurt, Leipzig, Dusseldorf, Nuremberg-Erlangen, and Innsbruck. His extensive writings on art history include many TASCHEN titles, such as Diego Velazquez, Ernst Ludwig Kirchner, Caspar David Friedrich, Expressionism, Romanesque, Landscape Painting, and Symbolism. Ingo F. Walther (1940-2007) was born in Berlin and studied medieval studies, literature, and art history in Frankfurt am Main and Munich. He published numerous books on the art of the Middle Ages and of the 19th and 20th centuries. Walther's many titles for TASCHEN include Vincent van Gogh, Pablo Picasso, Art of the 20th Century, and Codices illustres.