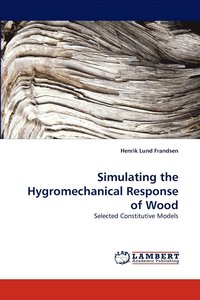 Simulating the Hygromechanical Response of Wood

av Henrik Lund Frandsen
Häftad Engelska, 2010-06-20
764
Köp
Spara som favorit
This PhD thesis treats modeling of the hygromechanical response of wood. To do so it is crucial to have accurate models for the moisture transport. Moisture transport in the cellular structure of wood consists of a combination of water vapor transport and bound water transport. In present work these are modeled as two diffusion equations, which are coupled through sorption. Such a model is able to describe so-called non-Fickian effects. Sorption is known to be hysteretic, which must be taken into account in order to describe changes of the moisture content in relation to water vapor pressure accurately. In present work a new sorption hysteresis model suitable for implementation into a numerical method is developed. The sorption hysteresis model is combined with the multi-Fickian model allowing simultaneous simulation of non-Fickian effects and hysteresis. Furthermore temperature dependencies of the model are considered. The latter part of this work deals with the transverse couplings in creep of wood based on experimental observations. A new orthotropic creep model, which provides directionally independent creep rates, is proposed.
Visa hela texten