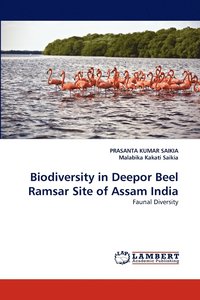 av Prasanta Kumar Saikia, Malabika Kakati Saikia
Häftad Engelska, 2011-04-20
779
Köp
Spara som favorit
Skickas inom 10-15 vardagar.
Fri frakt inom Sverige för privatpersoner.
Deepor beel is a large natural wetland having great biological and environmental values. It is endowed with rich Floral and Faunal diversity. The ecosystem harboars huge congregation of residential and migratory waterfowl each year. Hence, it attracts ornithologists, tourists and naturalists across the globe. It was declared as an internationally important wetland and included in the Directory of Asian Wetlands and Ramsar Site. Its plays an outstanding hydrological, biological and ecological role and substantial socioeconomic and cultural value and as well as supporting an appropriate assemblage of rare,vulnerable, endangered, endemic species of plants and animals. The wetland is a lifeline to a community of over 5000 fisher folks and apparently contributes to the regional trade. The study of biodiversity and analysis data could help to highlight importance of the wetland. Over the last few decades we deeply felt the necessity of a publishing document in the form of book on the Faunal diversity of Deepor Beel Ramsar site for national and International tourists,researchers, bureaucrats and decision makers for its proper conservation action plan and worldwide publicity.
Visa hela texten