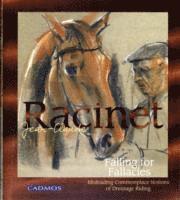 av Jean-Claude Racinet
(1 röst)  |  Läs 1 recension
Inbunden Engelska, 2009-10-01
289
Köp
Spara som favorit
Skickas inom 5-8 vardagar.
Fri frakt inom Sverige för privatpersoner.
The world of modern dressage includes an entire canon of doctrines, which are never questioned, either individually or in form of the system, which they present in their entirety. Everybody seems to have a clear and complete comprehension of their meaning. However, what does it really mean to drive the horse 'onto the bit'? Does a stronger application of the rider's aids really encourage the horse to place its hind legs further under its body? Is the term collection really synonymous with the increased forward engagement of the hind legs under the centre of balance? Jean-Claude Racinet subjects these and other questions, regarding the anatomical and biomechanical points of view, to a critical analysis and uncovers many things in this context, which contradict each other. This book, a summary of decades of extensive experiences as a rider, offers a long-overdue contribution towards the discussion of the sense and nonsense of the training doctrines commonly used and applied in the modern form of dressage. It deals effectively with prejudices and is aimed at supporting the art of horse-orientated equitation.
Visa hela texten

Jean-Claude Racinet, born in 1929, is renown world-wide as one of the most esteemed trainers of the French tradition of the Legerete. His basic and advanced training took place, amongst other schools of equitation, at the School of Cavalry in Saumur. In later years, he became a free-lance professional trainer and rider and emigrated to the United States in the 1980's, where he has lived since. He is well-known as the author of a number of books on riding based on Legerete and has also written several articles on the classical form of equitation for a number of renowned equestrian magazines. Christian Kristen von Stetten earned himself a name as a translator and editor of many books on Legerete and on classical dressage, as well as contributing articles in many international magazines. Having lived in Canada for many years, he is internationally respected as a trainer, and is regularly running clinics in the USA and Germany