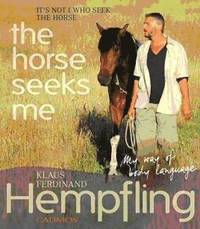 It's Not I Who Seek the Horse, the Horse Seeks Me

My Path to an Understanding of Equine Body Language

Klaus Ferdinand Hempfling is internationally regarded as an expert on the body language of horses. Using the example of two stallions, he explains his system of a non-violent relationship to the horse. Illustrated with many pictures, the reader will follow the progress of Arab Stallion Marouk and Lusitano Stallion Queijo in discovering a confident and harmonious relationship to their human. In detail and with comprehensive insight, and with the help of many illustrations and photographs, the author introduces the reader in this book to the fascinating world of understanding horses through body language.
Visa hela texten

"Aremarkable book with spectacular photography, views of a man who is one with his horses. "American Quarter Horse Journal" on "What Horses Reveal"

Klaus Ferdinand Hempfling graduated in media and communication studies and has always had an interested in the different forms of art. He was celebrated as a 'prolific horse whisperer', but was later criticised by some circles for his esoteric approach to horse training. However, Klaus Ferdinand Hempfling has gained recognition internationally, and regularly runs workshops on body language in our relationship to horses all over the world. His books, in particular his best-selling DANCING WITH HORSES, have been translated into many languages. He also works with problem and dangerous horses. KF Hempfling lives in Denmark.