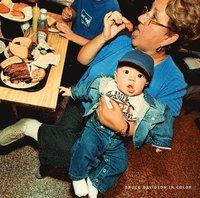 Ranging from street scenes to fashion shoots to documentary projects, the retrospective shows off his versatility as a visual stylist and wry social commentator.--Jack Crager "American Photo " In Color makes clear that resorting to chromatic film was never an after-thought for Davidson, nor was it an exceptional one-off reserved to Subway, a series he produced in the 1980s. The book opens with photographs taken as early as 1957 and spans his entire career. It also brings to light the variety of styles he embraced, from anthropological studies a la National Geographic of faraway lands to romantic shots of his family's vacations in Martha's Vineyard, before closing with an outlandish look at Katz's Delicatessen in New York City.--Laurence Butet-Roch "TIME Lightbox " A selection of rarely seen color photographs selected by Davidson himself, Steidl's monograph is a vibrant survey of commercial, fashion and documentary work.--Phil Bicker "TIME Lightbox "