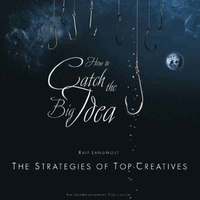 How to catch the Big Idea

The Strategies of the Top-Creatives

av Ralf Langwost
Inbunden Engelska, 2004-10-01
459
Köp
Spara som favorit
Skickas inom 7-10 vardagar.
Fri frakt inom Sverige för privatpersoner.
Great and successful advertising ideas do not come about just by chance; they result from a professionally managed creative process. That is the reason why top creative agencies and clients can repeatedly come up with great ideas. This book shows what these creative experts have in common. This is emphasized by numerous original quotes from interviews held by the author with more than 70 such communication experts from 15 countries. To answer the exciting question "how to be creative faster, more often and with more precision?" For all those involved in the creative process, this book provides a practical workflow structure and powerful tips for coming up with great communication ideas. Starting with the first meeting with the client proceeding on through briefing, gathering information, strategic writing of the benefits, finding the idea, describing and rating it, and finally producing the idea and making sure that it is well protected.This book shows the reader how to optimize his/her own thought process and working method - effectively, clearly and independently. "How to Catch the Big Idea" provides practical, powerful and inspiring impetus for the reader's daily business. The book clearly and concretely describes how to develop and manage great ideas. It shows how to create a relevant strategy and ultimately put it to effect, to establish and support an effective and more creative working structure. Whoever wants to learn from the world's best creatives will really enjoy this book.
Visa hela texten

"As we are in the business of ideas, this is a great one." John Hegarty, Founder BBH, London

Bloggat om How to catch the Big Idea

Ralf Langwost holds a degree in communication science and is an innovation coach. After studying at the University of the Arts in Berlin, he worked for several advertising agencies, including Ogilvy & Mather, Ted Bates and Wunderman/Young & Rubicam, Frankfurt, ending up as creative director for such renowned international brands as American Express, Pirelli, Swissair and Novell. With his founding of IdeaManagement(r), Langwost established an internationally successful coaching concept, that is the first to allow the training of top creative performance within a deliberately managed value-added process. By applying the latest results from creativity research to creation and communication, he shows in his workshops how to catch the "Big Idea" more easily and more quickly. These days Ralf Langwost advises managers and other employees of companies and agencies in Germany and abroad in adapting and optimizing their creative resources. His clients are mainly innovation-oriented enterprises, advertising agencies, product development teams, pioneering television stations or international brand names.

I. INTRODUCTION.Catch the Big Idea.For Whom this Book has been Written.II. MANAGEMENT PRINCIPLES OF GREAT IDEAS.The idea as the Highest Form of Energy.The Value of Great Ideas.The Added-Value Power of a Nanosecond.III. THE 12 SUCCESS FACTORS FOR GREAT IDEAS.The Most Important Added-Value Factors in Top-Creative Processes.1. The Company-Vision.How to Create a Company that Works for Big Ideas.The Culture Produces the Work (Dan Wieden).2. The Client.How to Make your Client a Great Creative Director.Not Only was the Client Open to Great Work, He Demanded it (Steve Simpson).3. The Creative Brief.How to Transform a Great Problem into a Great Idea.The Most Enjoyable Part of the Job is Cracking the Problem (Loz Simpson).4. The Information.How to Gain an Insight, that Makes a Difference.Interrogate the Product Until it Confesses (Rob Kitchen).5. The Strategy.How to Give an Idea a Clear and Relevant Direction.Truth is the Best Strategy Anybody Ever Had (John Hegarty).6. The Creative Brief.How to Focus an Energy to Start an Idea.A Good Brief is when You Get Excited (Nick Worthington).7. Finding the Idea.How to Receive an Answer that You Did not Expect.Wounldn't it be Silly, if...(Rob Kitchen).8. Describing the Idea.How to Work with an Idea without Losing It.You Can't Lose an Idea (Javi Carro).9. Evaluating the Idea.How to Judge an Idea Professionally.If It's Fine it Doesn't Happen, If It's Great, It Happens (Rich Silverstein).10. Presenting the Idea.How to Let the Energy of an Idea Jump Over.Clients Buy Conviction Not an Idea (Toni Segarra).11. Protecting the Idea.How to Protect a Great Idea Before it Shows Up.Belief Comes First (John Hegarty).12. Producing the Idea.How to Manifest a Magic Kiss.Production is Really Dangerous (Felix de Castro).IV. THE WORLD NEEDS GREAT IDEAS.Are You Going to Change the World?Thoughts for the Next Generation.Train the Strategies of the Top-Creatives.Index of Keywords.