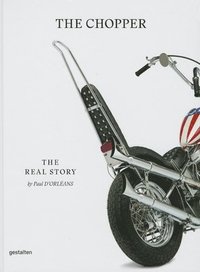 av Pierre Joseph D'Orleans, Robert Klanten
Inbunden Engelska, 2014-10-31
511
Köp
Spara som favorit
Skickas inom 5-8 vardagar.
Gratis frakt inom Sverige över 159 kr för privatpersoner.
The Chopper is a quintessentially American invention, rivaling jazz and abstract expressionism as one of the country's most emblematic cultural exports of the twentieth century. Choppers have deep roots in the origins of American motorcycling, flourishing after the Second World War out of a heady mix of personal mobility, an identification with the legends of the Wild West, and an interracial cross-pollination simultaneous to the creation of rock 'n' roll. With its own system of unspoken rules for both machine and rider, the chopper has a special status in the motorcycle world-a position it earned despite being actively discouraged by the professional motorcycle industry for decades.By the time the film Easy Rider was released, the chopper was firmly established as an icon of the American dream. Choppers are instantly recognizable-the dangerously stretched forks, crazy paint jobs, and feet-forward riding position are an outrageous statement of freedom, which sprouted in California and spread like a weed to the rest of the world.Since the 1920s, an independent scene of riders and builders from around the world has continuously evolved the canon of the chopper. What began as the ultimate American folk art movement, with a self-identified "outsider" status, has now been marketed and commercially exploited for generations by pop culture, television shows, and print media, while government agencies use choppers as symbols of crime and anarchy. Despite the fact that the chopper's real story is much more complex and thrilling than the stereotypes that surround it, it has never been told-until now. ?In this book, leading motorcycle journalist and vintage motorcycle expert Paul d'Orléans tells the chopper's true story, from its origins to its renaissance today. He provides insight into legendary builders such as Arlen Ness, super-cool riders both male and female, "patch club" motorcycle gangs, ingenious Japanese workshops, and the young enthusiasts who are now reviving the chopper's popularity.With its well-informed texts and showcase of historical and contemporary photographs, this book finally gives the chopper the respectful attention it deserves.
Visa hela texten