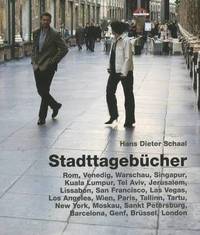 av Hans Dieter Schaal
Inbunden Tyska, 2009-11-07
807
Köp
Spara som favorit
Text in German. What runs through our minds when somebody says the names of the following cities: Rome, Venice, Warsaw, Singapore, Tel Aviv, Jerusalem, Lisbon, San Francisco, Los Angeles, Las Vegas, Vienna, Paris, Tartu, Tallinn, New York, Moscow, Saint Petersburg, Barcelona, Geneva, Brussels, London? Each name's aura of associations is so powerful that no-one will be able to give an answer that applies for everybody. When asked this question, almost everyone's answer will be triggered by their own biography, by any personal experience of the city in question they might have. One person might remember a dishonest taxi driver who drove them from the airport into the city. Another might remember a successful or unsuccessful business deal, while yet another might remember a terrible or excellent hotel, a project that he or she completed in that city or people met there. Some people will have met the love of their lives there -- or quarrelled with them for the final time. Some will have spent their honeymoons there, while other will have been divorced there. Some of those asked will certainly have had a bad accident in one city or the other, or been robbed there. They might say any of the following things: "It's a beautiful city!", "It's one of the ugliest and most dangerous cities I've ever been to!", "You see nothing but rubbish and chaos in that city!", "You can forget the passage of time in that city -- it's so wonderfully old-fashioned that it makes me cry!", "This city is so lively and colourful and loud that it was where I finally found out what life can be like!", "That city is so sensible, neat and well-controlled that it made me even more introverted and depressed than I am usually!", "You should only judge a city by its dogs!", "A good city for shopping!" Although the houses, alleys, streets and city squares really do exist, every city is created mostly from stories, beliefs, prejudices, cliches, scraps of knowledge, observations, personal experiences, first-hand or second-hand impressions, dreams, hopes and fears. The architect Hans Dieter Schaal, who has designed scenery for almost every major theatre and opera house in the world, often spent many days in the same city. He began to research the cities, to get the feel of them and to travel them on foot like a wanderer. Alongside these subjective impressions, the author presents plenty of facts, making this book an accurate picture of an age dominated by cities.
Visa hela texten

Hans Dieter Schaal is a stage designer, architect, landscape designer, philosopher and utopian rolled into one. His works, most of which were published by Edition Axel Menges, have in the mean time found an audience not only in his home country, but throughout the world. The author lives and works in Attenweiler near Biberach (Riss).