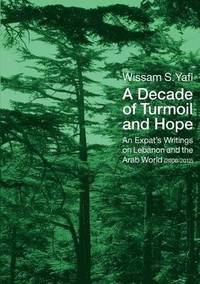 A Decade of Turmoil and Hope

av Wissam Yafi
Häftad Engelska, 2013-08-05
220
Köp
Spara som favorit
Kan tyvärr inte levereras innan julafton.
A Decade of Turmoil and Hope is the latest book by Wissam Yafi covering his native Lebanon and the Arab region. In this book, Yafi shares with his readers personal narrative from an expat's perspective, chronicling Lebanon's re-mergence after its civil war, its geopolitical victories, and its looming socio-economic crisis. His commentary then moves to the regional level with the United States' invasion of Iraq. Notwithstanding the Iraqi human tragedy, Yafi would become among the first to voice hope for regional change. This would soon be proven as Lebanon, emboldened by regional seismic shifts, saw its people demand freedom. And while it would come at a hefty cost, as Yafi argues, the Cedar Revolution would ultimately prove to be one of the primary pollinating factors for the Arab spring, giving hope to millions of people all over the region.
Visa hela texten

As a technologist and International Development practitioner, Wissam Yafi has worked closely with global organizations and NGOs on topics ranging from ICT, education, knowledge sharing, and entrepreneurship. He has travelled and written extensively about his native Lebanon and the Middle East. His first published book, Inevitable Democracy in the Arab World: New Realities in an Ancient Land received acclaim; and he has been invited to lecture at venues such as Harvard's Kennedy School of Government, Stanford, Georgetown, AUB and the Carnegie Endowment for Peace. He holds an MPA in International Development graduate degree from Harvard University.