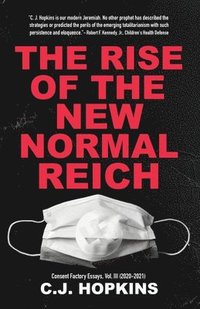 The Rise of the New Normal Reich

av C J Hopkins
Häftad Engelska, 2022-05-06
236
Köp
Spara som favorit
Kan levereras innan julafton!
In this third volume of his Consent Factory Essays, C. J. Hopkins presents an unofficial history of the roll-out of the so-called "New Normal" during the 2020-2021 Covid-19 pandemic, and an analysis of this new, pathologized-totalitarian ideology that has radically transformed societies around the world.

From the proclamation of the "New Normal" and the initial propaganda blitzkrieg in March of 2020, and on through the global lockdowns, the suspension of constitutional rights, the mask mandates, the social distancing, the censorship, the segregation and persecution of "the Unvaccinated," and, finally, the collapse of the official Covid narrative at the end of 2021, the essays in this volume comprise an "as-it-happened" record of how insane and totalitarian things got, and puts the madness into context. "No other prophet has described the strategies or predicted the perils of the emerging totalitarianism with such persistence and eloquence." (Robert F. Kennedy, Jr.)

Featuring popular essays like The Covidian Cult, The "Unvaccinated" Question, The Criminalization of Dissent, Manufacturing New Normal "Reality," and a new introductory essay exploring the question of how nominally democratic societies around the world could be so suddenly and easily transformed into pathologized-totalitarian police states, the essays in this collection present "[a] searing (and therefore satisfying) chronicle of life in, and against, the locked-down, masked-up, triple-vaxxed madhouse of New Normal insanity." (Max Blumenthal)

"[Hopkins] was one of the only people in English willing to do [that], and he did it with his trademark wit and bravado. He'll be remembered as a signature chronicler of the 'New Normal.'" (Matt Taibbi)
Visa hela texten

C. J. Hopkins is an award-winning playwright, novelist, and political satirist. His plays have been produced and have toured at theatres and festivals including Riverside Studios (London), 59E59 Theaters (New York), Traverse Theatre (Edinburgh), Belvoir St. Theatre (Sydney), the Du Maurier World Stage Festival (Toronto), Needtheater (Los Angeles), 7 Stages (Atlanta), the Edinburgh Festival Fringe, Adelaide Fringe, Brighton Festival, and the Noorderzon Festival (the Netherlands), among others. His writing awards include the 2002 First of the Scotsman Fringe Firsts, Scotsman Fringe Firsts in 2002 and 2005, and the 2004 Best Play of the Adelaide Fringe. His political satire and commentary has been published by Consent Factory, OffGuardian, ZeroHedge, ColdType, Rubikon, RT.com, CounterPunch, Dissident Voice, and many other publications, and has been widely translated. His debut novel, Zone 23, is published by Snoggsworthy, Swaine & Cormorant.