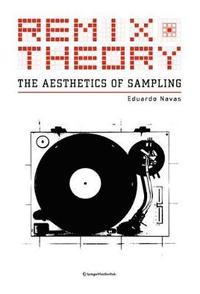 Remix Theory: The Aesthetics of Sampling

Eduardo Navas researches the crossover of art and media in culture. His production includes art & media projects, critical texts, and curatorial projects. He has presented and lectured about his work and research internationally. Navas collaborates with artists and institutions in various countries to organize events and develop new forms of publication. He has lectured on art and media theory and practice at various colleges and universities in the United States including Otis College of Art and Design, San Diego State University, Pennsylvania State University, as well as Eugene Lang College of Liberal Arts and The School for Public Engagement at The New School. Navas received his Ph.D. from the Department of Art and Media History, Theory, and Criticism at the University of California in San Diego and is a Post Doctoral Fellow in the Department of Information Science and Media Studies at the University of Bergen, Norway. Selected texts and research projects are available on Remix Theory: http://remixtheory.net. His main website: http://navasse.net