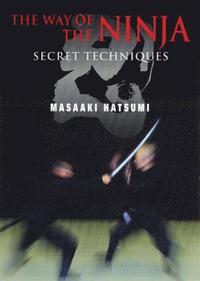 The Way of the Ninja

In this book, the author explains the essence, truth, and wisdom of Ninjitsu, an art of a thousand forms and innumerable variations. Through his writing and many detailed pictures, the author reveals the hidden reality behind this fascinating martial art. A Ninja was someone whose very existence expressed the spirit of Budo. He would protect himself with techniques not of assassination but rather of sensation and an acute awareness of his natural surroundings. He would avoid unnecessary conflict, and even if armed with a blade, would find a way to win without staining
Visa hela texten

"The book itself is a kin do 'secret document' with many hidden teachings in the from of metaphors or explanations that contain obscure meanings. ...This is no oversight. Hatsumi intentionally did this as a way to get the reader to ponder the techniques more deeply. Almost like a Zen koan." -Journalof Asian Martial Arts"Through perceptive observations and many detailed pictures, Dr. Hatsumi reveals the hidden reality behind this mysterious and fascinating martial art. The Way of the Ninja will help widen readers' perceptions and deepen their understanding of two essential principles. One is that Ninjutsu is the very back bone of the martial arts; the other, that Ninjutsu reveals their true spiritual significance. -Cultral News."..no stunts: They're the real thing!" -Asian Week

Bloggat om The Way of the Ninja

Dr. MASAAKI HATSUMI was born in 1931. After progressing through various martial arts, he found his life's mentor, Takamatsu Toshitsugu, and studied under him for the next fifteen years, becoming 34th Grandmaster of Togakure-ryu Ninjutsu and eight other arts, which he unified into the Bujinkan system. While traveling the world, teaching thousands of individual students as well as law enforcement agencies, he received numerous accolades from politicians and spiritual leaders of many nationalities. He has also worked as a professional osteopath, acted in a popular television series, and as the author of many books on Ninjutsu, was for many years Chairman of the International Department of the Japan Literary Artists' Club. BEN JONES After winning a scholarship to Oxford University to study Japanese, he moved to Japan and trained in the Bujinkan, interpreting for Dr. Hatsumi at seminars around the world. Former head of the Institute of Translation and Interpreting's Japanese Network, he now runs a successful translation and typesetting business from his home in Kent, UK.