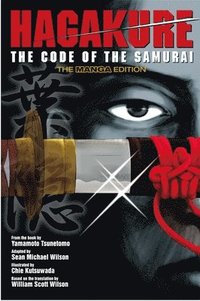 Hagakure: Code Of The Samurai (the Manga Edition)

SEAN WILSON has written a number of comic books and manga, including Sweeney Todd (Classical Comics, due summer 2010, also a Johnny Depp movie), Charles Dickens's A Christmas Carol (Classical Comics, winter 2008), Emily Bronte's Wuthering Heights (Classical comics, due Autumn 2010), Lafcadio Hearn's Japanese Ghost Stories (2007, in both English and Japanese versions) Oscar Wilde's Canterville Ghost (Classical Comics, spring 2010), The Japanese Drawing Room, with RING horror manga artist Sakura Mizuki (summer 2006), The Story of Lee (due summer 2010, NBM Inc., NYC), Buskers (winter 2009, in tandem with a movie of the same name with several well-known actors attached), Iraq: Operation Corporate Takeover (2007), with an exhibition in London in 2009. He is presently editing AX: Alternative Manga, a 400-page collection of cutting-edge Japanese manga in English (summer 2010, Top Shelf, USA). For the Dickens book, he is working with famed comic book artist Mike Collins, who's done Batman, Superman, Harry Potter, and others. He has received several grants from both the English Arts Council and others. A well-known figure in teaching manga in the UK, CHIE KUTSUWADA first graduated as an art major from a Japanese college before her moving to London, where she continued her studies at the Royal College of Art in London. After finishing her education, she settled in London, where she started creating manga. Her first unique 100-page love story, King of a Miniature Garden was published in 2007 as a part of The Mammoth Book of Best New Manga 2. In 2008, her short, heart-warming ghost story Moon Light was short-listed for the competition at the Japan Embassy in London and included in Best New Manga 3. She drew the manga for an adaptation of William Shakespeare's As You Like It with the writer Richard Appignanesi and published by Self Made Hero. She's now busy illustrating The Story of Lee (due summer 2010, NBM Inc.) with Hagakure co-author Sean Wilson. Ms. Kutsuwada also runs manga workshops and gives talks on drawing manga around the U.K., including such well-known venues as the Victoria & Albert Museum, British Library and British Museum.