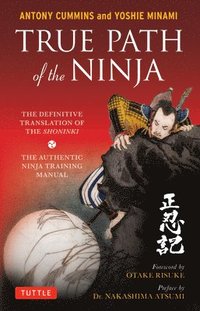 True Path of the Ninja

The Definitive Translation of the Shoninki (The Authentic Ninja Training Manual)

av Antony Cummins, Yoshie Minami
Häftad Engelska, 2017-03-14
141
Bevaka
Spara som favorit
Tillfälligt slut – klicka "Bevaka" för att få ett mejl så fort boken går att köpa igen.
Finns även som
Visa alla 1 format & utgåvor
True Path of the Ninja is the first authoritative translation in English of the Shoninki-the famous 17th-century ninjutsu manual. Authors Antony Cummins and Yoshie Minami worked closely with Dr. Nakashima Atsumi, author of the most comprehensive modern Japanese version of the Shoninki, thus making this English translation the closest to the original scrolls. The information and insights found in this translation are invaluable for understanding the skills, techniques and mentality of the historical shinobi. Whether it involved tips for surviving in the wild, advice on intelligence-gathering techniques, or methods for creating chaos in the enemy camp, this ninja book unveils secrets long lost. Along with its practical applications, this book is an important guide to the mental discipline that ninjas must have to ensure success in accomplishing their mission. True Path of the Ninja covers the following topics: What a ninja is and what equipment he needs The skills of infiltration and information gathering How to disrupt and distract the enemy How to be mentally prepared to carry out ninja missions In addition to the translation of the Shoninki, this book also includes the first written record of the oral tradition "Defense Against a Ninja" taught by Otake Risuke, the revered sensei of the legendary Katori Shinto Ryu school of swordsmanship. Sensei reveals for the first time these ancient and traditional teachings on how the samurai can protect himself from the cunning wiles of a ninja. About this new edition: This second edition contains a new introduction by the translator and has been thoroughly updated to reflect developments that shed new light on the original Japanese text.
Visa hela texten

"...the most excellent masterpiece of all the manuscripts on ninjutsu that have ever been written." -Otake Risuke, Katori Shinto Ryu, Head Teaching Master, from his foreword "...every time you reread this book you will obtain a new perspective." -Dr. Nakashima Atsumi, Translator of the Shoninki into modern Japanese "...the first definitive English-language translation of the Shoninki." -Metropolis "Read it for the entertainment and interest in history but be open to expanding upon some simple life concepts that the ninja applied to their work. It's well worth the read if you're a fan of ninjas and Japanese culture." -Martial Arts + Action Movies blog

Antony Cummins heads the Historical Ninjutsu Research Team, a project that documents, translates and publishes medieval documents pertaining to the shinobi of Japan. As a world-renowned ninja historian, his background as an archaeologist and historian gives him a unique insight into their mysterious world. Antony has revived an old samurai school of war, Natori-Ryu, with the aim of educating people on historical Japanese warfare. His aim is to establish a correct understanding of Japanese military arts and to bring about a deeper knowledge of, and respect for, Japanese arts. A trained martial artist, he is the author of nearly a dozen books on ninja and martial arts. Risuke Otake is the teaching master at the world famous Katori Shinto Ryu, the oldest samurai sword school in the world. He is a member of the Order of the Rising Sun; an honored conferred on him in 2005 by the Akihito of Japan. Dr. Nakashima Atsumi has worked with the Iga Museum on translating the Shoninki from 17th century Japanese into modern Japanese. He is also the chairman of the Federation of Japanese Koryu Bujutsu, an organization for the traditional schools of the martial arts in Japan. Yoshie Minami was born in Tokyo and currently lives in Saitama, Japan. She has a B.A. in Linguistics from the International Christian University.