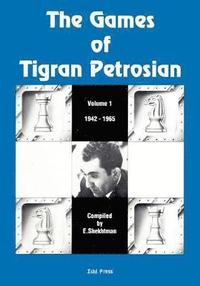 av Eduard I Shekhtman, Tigran Petrosian
Häftad Engelska, 2012-08-31
369
Köp
Spara som favorit
Skickas inom 10-15 vardagar.
Fri frakt inom Sverige för privatpersoner.
Prior his untimely death in Moscow on 13 August 1984.at the age of only 55, Former World Chess Champion Tigran Vartanovich Petrosian had been collecting his games and was preparing lectures and notes. He was planning to compile them all into a book. However, due to his premature death the book was never published.His widow Rona E. Petrosian went to work and with Eduard Shekhtman and with great difficulty was able to collect and compile the games which are published here.What is most surprising is that Petrosian is perhaps the only world champion other than Bobby Fischer to have a complete collection of his games published. There is no complete collection of the games of Tal, Smyslov or Botvinnik and there will probably never be one.Tigran Petrosian (1929-1984) was World Chess Champion from 1963 to 1969 and was one of the strongest players in the world throughout his lengthy career.
Visa hela texten