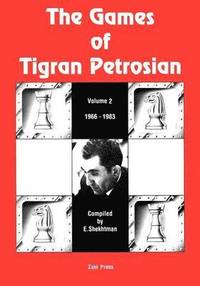 av Eduard I Shekhtman, Kenneth P Neat
Häftad Engelska, 2012-11-30
379
Köp
Spara som favorit
Skickas inom 10-15 vardagar.
Fri frakt inom Sverige för privatpersoner.
This is the second volume of a two-volume work on the games of Tigran Petrosian. The first volume has his games from 1942 to 1965.

He is perhaps best known today for being the one who broke Bobby Fischer's streak of winning 20 games in a row against grandmasters.

Petrosian had an unusual playing style. Instead of attacking, he would anticipate his opponent's attacks. He would set traps and pitfalls so that when the opponent attacked he would usually fall on his own sword.

This gave Petrosian the undeserved reputation of being a dull, drawish player. Statistics show that Petrosian was not a drawish player at all. Tal would attack often unsoundly hoping to catch the opponent in a maze of complications. Fischer by contrast always tried to make the best move and would only sacrifice after he had analyzed deeply and found the sacrifice to be sound and correct.

Petrosian on the other hand would wait until the opponent attacked him.

Modern players study the games of Petrosian in order to try to understand what he was doing. His deep positional insights are difficult to ferret out.

Prior his untimely death in Moscow on 13 August 1984.at the age of only 55, Former World Chess Champion Tigran Vartanovich Petrosian had been collecting his games and was preparing lectures and notes. He was planning to compile them all into a book. However, due to his premature death the book was never published.

His widow Rona E. Petrosian went to work and with Eduard Shekhtman and with great difficulty was able to collect and compile the games which are published here.
Visa hela texten