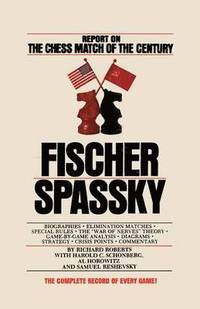 Fischer / Spassky Report on the Chess Match of the Century

av Richard Roberts, Harold C Schonberg
Häftad Engelska, 2013-05-07
329
Köp
Spara som favorit
Skickas inom 10-15 vardagar.
Fri frakt inom Sverige för privatpersoner.
This book tells the story and the drama of the Chess Match of the Century. There have been many books on the 1972 Match between Fischer and Spassky for the World Chess Championship. However, this book is different from the others in that it was written by professional writers who wrote regularly for The New York Times. The quality of the writing is superior. It also does not bore the non-chess players who are likely to be reading this book. It does not contain technical variations that were not played in the actual games.It was only because his results showed that he was clearly the strongest player in the world that Lt. Col. Edmondson, President of the United States Chess Federation, and Max Euwe, President of the World Chess Federation ("FIDE"), went to extraordinary lengths to get him to play. Meanwhile, the rest of us who knew Fischer watched from the sidelines, feeling almost certain that Fischer would not sit down to play, or if he did start the match he would never complete the schedule.We were proven wrong and they were proven right. Included in this reprint is a new introduction and all moves of the twenty games actually played.
Visa hela texten