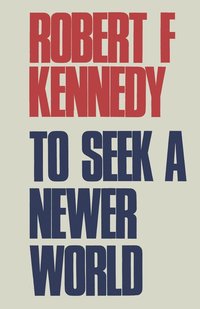 To Seek a Newer World

av Jr Robert F Kennedy, Sam Sloan
Häftad Engelska, 2017-05-06
309
Köp
Spara som favorit
Skickas inom 10-15 vardagar.
Fri frakt inom Sverige för privatpersoner.
These essays by Robert F. Kennedy, which grew out of speeches, travel and his experience as Attorney General and a United States Senator, pose a simple question for America and consequently for the free world, in the 60s and 70s: Are you willing to dare?Today's challenges are awesome in scope and baffling in complexity. A military coup in Brazil may effect the entire hemisphere and endanger the Alliance for Progress. Riots and decay in the American cities pose the dangers of war in the streets, and a permanent alienation of black and white America. Vietnam raises the possibility of recurrent draining conflict, with a huge and unknown China beyond. And overall loom the new weapons of war, threatening at every moment to destroy all they were designed to defend.But for all the problems, says the author, our fortunes need not and cannot be surrendered to an inscrutable fate. The question posed is not to America's resources, not to their ability, but to their commitment and character.This is the question Robert Kennedy repeatedly addresses in To Seek a Newer World. As a major architect of positions and policies at home and abroad since 1961, he is candid in assessing his countries shortcomings and mistakes. Yet his call for a new ordering of national priorities is a hopeful one - to match American heritage and power with a new effort and will - to seek a newer world for the United States and for the community of man.
Visa hela texten