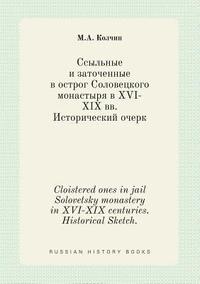 av M A Kolchin
Häftad Ryska, 2015-02-26
379
Köp
Spara som favorit
Skickas inom 10-15 vardagar.
Fri frakt inom Sverige för privatpersoner.
In 1908 in Moscow, published a monograph M. Kolchin "exiles and imprisonment in jail Solovetsky monastery." Posted in the Solovetsky monastery, the author was actively engaged in educational activities, did not stop it, and the conditions vtyazhelyh links. Using the secret archives of the monastery, he described the situation of prisoners. M. Kolchinschital that monasteries began to serve as a place of exile and conclusions objectionable persons from the time of Ivan III and Vasily III ipostepenno turned into a nationwide prison. It served these purposes Solovetsky monastery founded v1437, the escape from the Solovetsky Monastery is very rare, and there was no case to escape dalsheostrova left. The monastery had a prison destroyed by the Decree of the Synod in 1742, and stone "bags" (niche) where canwas a stand. Imposed on the prisoners rioted mouth gag and removed it only for meals.
Visa hela texten